We also have a Patreon if you prefer that, there's rewards and stuff there.

Sometimes your on-the-go adventurer finds themselves unable to sit down for a leisurely dine-in at the local public house. Fortunately for them, Salt & Granite is here to help with Lunch Rush, a weekly series chronicling the finest in quick service cuisine. Every Thursday we’ll look at a menu item from one of the many quick service restaurants in New England and see how it stacks up — or falls apart. 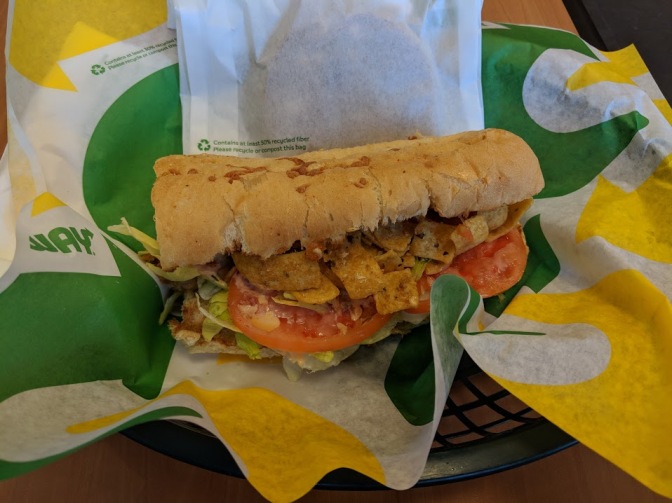 As Taco Bell was adding Doritos to taco shells and Burger King was experimenting with Cheetos in mac and cheese, Subway felt the pinch. Throughout the 90s, Subway was the go-to place for young, health-conscious consumers, and the chain had no reason to think that was going to change. And in the early 2000s it didn’t. But slowly, Subway eaters wandered away. Food trucks proliferated in cities and rival chains like Chipotle filled the suburbs. What was there to do? Innovate. Innovate by doing exactly what the others were doing, but with Fritos instead. Brilliant.

Enter the Fritos Chicken Enchilada Melt, a normal Subway sandwich but with Fritos on it. Sensational.

Alright, let’s be fair. A normal Subway sandwich can be kind of bland, especially with plain ol’ deli meat. The Fritos sandwich – which first debuted back in 2014 – provides a crisp crunch that, for some reason, the lettuce is unable to offer.

Every restaurant has a “standard” prep plan for its sandwiches. Try it. Go into your corner store and tell them you want an “italian” (I assume you live in New England somewhere). Chances are good they won’t ask what you want on it besides ham/turkey/roast beef/salami. And while they’ll make it custom, you’re getting side-eyed if you ask for spinach or ranch dressing.

Subway, too, has some mystical “standard” design for each sandwich, but it seems they never pass this on to their employees. So to make today’s sandwich, I relied on staring at the wall.

After putting the chicken and cheese on the bread, the sandwich artist toasted my sub. I assume this was to finish cooking the still slighty-undercooked bread, because it did very little to affect the chicken, which remained cold.

Tell you what, though. If you can stomach cold (fully cooked) chicken, don’t even bother with the toasting stage. It makes the bread a little crisp, which is not necessary when you’ve got Fritos around.

Actually, skip the bread entirely. About three bites in, it fell apart.

That’s the other side of the sub. You know, where the hinge is supposed to be. The hinge could not stand up to Chipotle Southwest Sauce – which is basically a ranch sauce with just enough spices to turn it a different color and give it an authentic southwest “Strip-Mall-in-Tempe” flavor.

But the thing is: it tastes good. The whole combo works together, between the shredded chicken and the crispy Fritos and, uh, actually those are the two parts that work together. Everything else is extraneous.

If you are a Subway connoisseur like I am, there must be one close to your home or office, because there aren’t a lot of other reasons to seek out Subway these days. The Fritos Chicken Enchilada Melt will be a nice addition to your Subway routine and I absolutely recommend it. On the other hand, if you aren’t already going to Subway five times a week for lunch, this isn’t the thing that’s going to make you change your mind. Especially not while Taco Bell’s nacho fries are back.

View all posts by Pyramid Staff